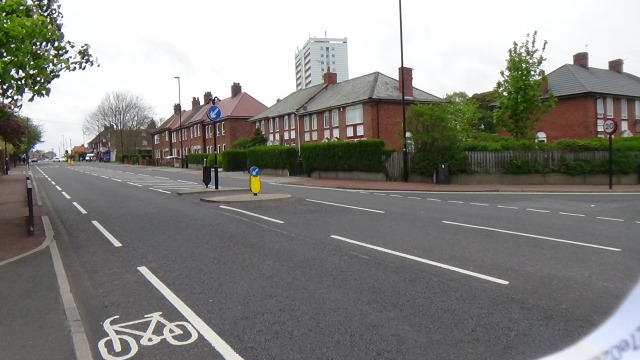 I’m cycling to Craig’s. It’s the last poem I’ll be delivering in the North East. This is where it ends.

By an odd twist of fate, I’m going to a street in Heaton. Some of you might remember this is the very first place I went nearly 2 years ago. I met Craig 10 miles away in Ponteland, but it turned out he was house-sitting and he actually lives down the road from me. It gives everything a circular, cinematic kind of feel. 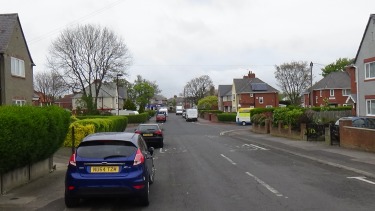 I text him asking if there was a good time to come round, but he hasn’t got back to me. I don’t know if he’ll even be in. As I pass the semi-detached house looking for a place to lock my bike up, I spot someone in the window. I prepare to explain myself to a stranger. It’s never easy.

I walk over to the door. I knock. A girl of about 18 answers, who I guess is Craig’s sister.
“Hi, is Craig there?”
“No,” she says.
“OK. I’ve wrote him a poem. It sounds a bit weird, I know. He asked me to do it.”
“He told us about you!” she says, smiling. It feels great that he found it interesting enough to mention. And it also stops me looking like a bit of a nut job.

She tells me her name is Jane. “Did you write one for him on the doorstep as well?” she asks. I explain the intro poem I do, the one that asks people what’s important to them. “It sounds great!” she says. “He’s at a cousin’s christening in Ireland.”
“Would you mind passing it on to him?” I hold up a brown envelope.
“Yeah, no bother.” 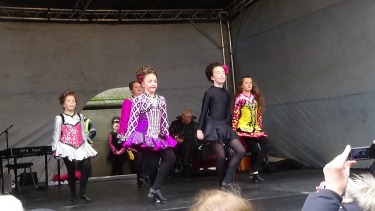 Craig asked for a poem about Irish dancing, but I didn’t really know anything about it when we met. I decided the best way forward was to see some in action. So, the day after St Patrick’s, I went to Grey’s Monument, where the Tyneside Irish Centre had arranged for some student dancers to do a show. I wrote about something I saw there.

“I’ve been checking him out on Youtube as well,” I say. “He’s class.” Yes, it turns out Craig is like… insanely famous. To be honest, I got the impression he was when he told me he was in Riverdance. But, looking up the website he gave me, there was a lot of equally impressive stuff he never mentioned. He’s danced with Mariah Carey, Nelly Furtado and his group, Prodijig, won Sky 1’s Got To Dance. It’s pretty mad that I just bumped into him by accident.

“Oh, one last thing,” I ask. “Would it be alright if we got in a photo? This is the last place I’m going in the North East before I try and take the idea round the country. It’d be great to show where it all ends.”
“I’ll have to ask.” She shouts to someone in the sitting room, who I think is Craig’s mam. The woman comes to the door and says yes. We all pose. “Should I get the poem in?” Jane adds. I like her. She’s a good sport. 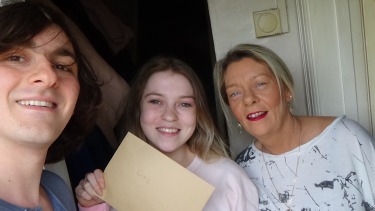 “All the best with what you’re doing,” Jane says. “It’s such a kind thing to do for people, you don’t really hear of anything like that.” I thank her and her mam and wave goodbye. They seem like a really sound bunch. And, considering Craig is an international superstar with a successful business, I think it’s really telling that he lives in a house with his family. He mentioned not wanting to tour anymore, about the downsides of the job; I guess he must have decided some things are more important than fame.

I’m a bit dazed. I can’t really believe this is the last place I’m visiting. It’s been an incredibly strange, amazing, exciting, exhausting journey. I hop on my bike, feeling massively grateful to everyone who’s gave up their time and shared a little piece of their life with me. Kyle, Josh, Helen, Dave, Alex, John, Andrea, Ana, Carl, Lee, Gemma, Alan, Lindsay, Michelle, The Captain, Masima, Sam, Nitram, Sami, Corey, Salman, Imam Kola, Nas, Julie, Chelsea, Jayne, Boris, Maj, Jeff, Linsday, Max, Caroline, Grace and Craig. Thank you, all of you. I might never see you again, but it’s really changed my life.
–

The day after St Patrick’s.
A hundred-strong crowd
condensed
at Monument’s grey
and she’s glued in the spotlight
of the cellophane stage.

4 years old.
A frozen pose
in a mini-sequined dress;
crossed legs, feet
at geometric right angles, a smile
the way her teacher said.

Shaking,
she waits for a violin’s bow
to scrape strings.
The audience’s silence
is scoring.
Her mind is an earthquake.

Except, this isn’t really where the story ends though. Someone’s missing. Do you remember Mrs Nutty? The last woman I met in Darras Hall? She didn’t have time to talk to me on the doorstep, but she gave me her email and said she would answer any questions I had on there. She also asked for the poem to be sent by email too.

Well, I messaged Mrs Nutty twice and she never responded. For the first time, I was faced with the task of trying to write a poem for someone with little to no information about them at all. I think it’s interesting that she’s the only person to ask for a conversation by email and it hasn’t worked. So much of this is about face-to-face, human contact. Maybe trying to do it any other way is kind of impossible.

Sitting at my desk, it feels like it should all finish on less of an anticlimax. Why did this have to happen now? Surely this can’t be it, can it? After all the highs and lows, this can’t be how the past 2 years ends? With me getting ditched by a woman who sells stencils on Ebay.

But, on second thought, maybe it’s quite fitting. True, after everything that’s happened, there’s an urge to leave on something profound, something that sums up the whole experience in one beautiful, uplifting moment. But the bathos of this is much more hilarious.

A little white cottage, a tangerine door,
I walked up the drive and saw through the porch
a statue of Buddha, one metre tall
dressed up in silver and stood in the hall.
I rung on the bell and a lady appeared
with bright purple feathers in both of her ears.
I asked for her name and she told me so bold:
Mrs Nutty, the nutter of Runnymede Road.

I told her I wanted to write her a ditty.
She told me I couldn’t because she was busy,
off to do crafts with a group of old ladies,
making Clarkson books better by folding the pages.
She laughed at my jokes and before I had left
she asked me to write down her email address
and send her the questions I needed to know
to learn more about her and pen her a poem.

Oh Mrs Nutty, oh where did you go?
I’m heartbroke for the nutter of Runnymede Road.
Oh Mrs Nutty, oh was it a lie?
I sent you 2 emails, you never replied.
Did you just get side-tracked with your pensioner crafts?
Or decide that my poetry was probably naff?
An amateur forced to go knocking on doors?
(Did I mention they played me on Radio 4?)

Oh Mrs Nutty, I don’t understand.
Did my email get lost by the cyber postman?
Did your husband find out and tell you there’s no chance
cos my knock was a thinly veiled sexual advance?
Did Clarkson drive by and shoot you with a cannonball?
Did the ladies you craft with turn out to be cannibals?
I’m wide-eyed at night and desperate to know
Mrs Nutty, the nutter of Runnymede Road.
–