I’m walking over to Amy’s house on a Saturday afternoon and the sun’s out for the first time in ages. I’ve got a poem in my shiny brown briefcase and I’m feeling quietly confident. But even a few days before this it was a very different story.

If you read my last post, you’ll know Amy was the really nice trainee police officer I spoke to. Even after I left her house that day though, I was feeling a bit of apprehension about writing a poem for her. You see, being a greasy liberal, I have some mixed feelings about the police. I’ve seen the heavy-handed way they can treat people first-hand; a scandal is never far from the papers, such as the sniper rifle that was recently pointed at peaceful protesters in Manchester.

Now, some poetry flies out of you with the grace and elegance of a goose moving south for the winter. This was not one of those times.  After working on something on and off for 2 weeks, I had a draft… but I wasn’t sure about it. So I sent it to the ever-wise Verb New Voices writer and all round idea-machine Matt Miller. ‘I’d lose the first 2 thirds,’ he said. ‘I’m not really sure that’s meant for Amy.’

‘But no!’ I cried via digital message. It was important. It was about how the police, as an institution, can abuse power; but it was also about how it’s made up of good people as well, people who want to help their community and work for the common good, people like Amy- and I wanted to say that if people like Amy exist then there’s hope for the future. So I went about refining the point.

A week passed. Then, late one night, the penny finally dropped: Why does Amy need to know any of this? Why does she need to know that meeting her reminded me that everyone in the police force isn’t evil? I realised that all I’d worked out was some really mixed feelings I had. It might have been OK in front of an audience but Matt was right, it definitely wasn’t for Amy.

I did learn something though. What I’m doing is writing for one person but it’s hard not to think about the other people who’ll read it or hear it out loud. Especially in this case because it might be read by other people in the police force as well. But it has to always start with the person I’m writing for; if it’s not for them then the whole thing is a massive waste of time.

So I wrote a different poem for Amy instead.

This is what I’m holding in my hand as I get to her door. The brass knocker taps… She answers, bleary eyed and yawning. I’ve woke her up. At 2 in the afternoon! Crime never sleeps but Amy definitely does. I ask her if this is a bad time. She doesn’t say yes but she also doesn’t say no, so I pass her one of the new ‘Sorry I missed you’ cards I’ve made and we arrange for me to come over on Monday morning instead. Walking home I start to worry. The whole poem is about Amy becoming a police officer but it’s been quite a long time since I spoke to her. What if she’s not doing that anymore? What if she’s a fire person? Or she’s working in Dorothy Perkins? 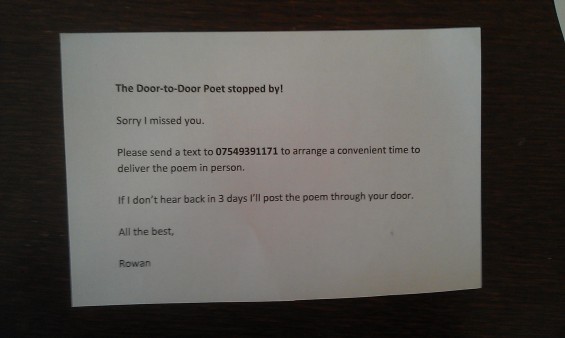 –
Bright and early at half 9 on Monday morning I set off and go back to Amy’s house. She’s in and she’s awake this time! I tell her I’m sorry for getting her up on Saturday and she says it happens all the time; a few days ago she fell asleep with the door left wide open. First job of the morning was scouting the house for burglars.

She tells me she’s told loads of people about me but none of them believed her! At work they said:

–
‘So a guy came and knocked on you and now he’s going to write a poem for you? Are you for real?’

‘That’s just the kind of thing that happens in Heaton,’ she answered.

I suppose it’s true. That is the kind of thing that happens in Heaton now. I’m really pleased to hear that the idea is getting people talking as well, it’s exactly what I wanted. We discuss other eccentrics who live nearby- like the old man with a long white moustache and a feathery cap who told Amy’s friend she had the legs of a sparrow. ‘Maybe that’s where I’m heading in life,’ I wonder.

I’m also really pleased to hear she passed her exam! She starts her beat on her own in 5 weeks. She tells me she’s enjoying the training but her tutor thinks she’s mental; he keeps telling her off for smiling at everyone. But she told him she’s not going to change that because it’s who she is. I love that. I read her my poem and she says she’s going to take it into work that afternoon. I’m so chuffed. The whole scene suddenly feels very idyllic; a rainbow breaks out in the distance.

I really like Amy, I think she’s going to make an amazing police officer. It was obvious even after the first time I met her that she genuinely cares about helping people. Talking to her reminded me that there are lots of people in the police force like that and I think too often I forget this. As I wave goodbye I feel uplifted. I think I’ve really learned something from this one, not just about writing but about people as well.

–
Amy, all the best on your new beat,
The people will applaud you in the streets
Cos you’re the kind of officer that listens
On your doorstep to poets’ mad ambitions.

I hope that when you say Allo Allo
You can always hit that certain tone
That sounds mundane but also proper sinister
And strikes fear into stripy-shirted burglars.

May you be safe and dish-out justice fair,
See human beings under the clothes they wear,
Stay calm in peaceful protests despite fear
And place your heart above your riot gear.

I’m hoping that for each PC who treats
The working classes like the enemy,
Who is confused on who’s protecting who,
There is at least 10,000 more of you.