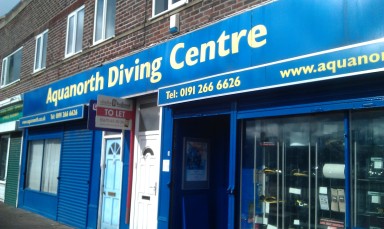 step into Aquanorth Diving Centre. There’s no one in the shop. The only sound is the faint hum of traffic on the Coast Road. I start to look at all the equipment, wet suits and masks and metal things with tubes sticking out. I’m about to say ‘Hello?’ when a lad appears from the back with long hair in a ponytail. I don’t know any divers, I never really expected to see one with long hair. I imagine it makes you less aqua-dynamic. But then again, maybe he doesn’t dive. Maybe he has no interest in diving outside of work.

“Hi, I’m wondering if you can help me. A guy called Alex has asked me to write a poem about diving for him. I’ve written it but I’ve guessed what a lot of the equipment is called, can I ask you a couple of questions?”

He seems really happy to help. He tells me the thing that measures the air is called the pressure gauge. I guessed it had a little needle on it, I guessed right.

The thing you put in your mouth is called a regulator, that’s the one that makes the noise like Darth Vader.

And the rubber flippers are called fins.

He tells me his name is Josh and I thank him for helping.

I try Alex’s house but there’s no answer. I’ve wrote a ‘Sorry I Missed You’ poem and I post it through his letterbox:

The Door-to-Door Poet came round
But you weren’t about,
He’s finished writing for you
And came to read it out.

Text or call his number,
He’s left it there below,
If there’s a more convenient time
To visit let him know.

He can read it at your door
It only takes a minute.
He could do it on one leg,
He could even sing it.

Or if you’d rather read it
By yourself that’s also fine,
He’ll put it through your post box
If you don’t text in 4 days’ time. 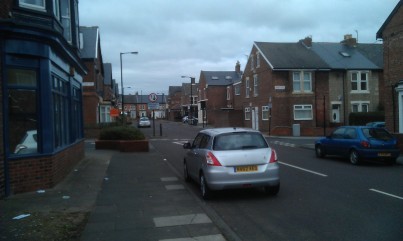 I head over to Helen the teacher’s house. It’s been a few weeks since I dropped off her husband’s poem and left my number, so I decide to have one last go. Her son answers and says that her and Dave are on holiday. I decide to give him the poem to pass on.

I’m a little disappointed, since I started leaving my number with people this is the first person I’ve abandoned dropping off something to. It’s a shame but I suppose I need to have a cut-off point. Plus I get the feeling I might see Helen again actually; Dave is looking into me performing all the poems I’ve written in Heaton at a party- all the people who live on Rothbury Terrace put on a back street BBQ a few times a year. He e-mailed to say all the organisers he’s asked so far are really up for it.

I’m hoping Helen is going to get a surprise when she reads this. I can imagine her having a look at my Doctor Dave poem, wondering how I’m going to try and make a daft joke out of her interests as well. But I haven’t! Ha ha. I’ve written something serious with integrity instead! Although there’s a chance I only did it for shock value and not because I actually felt anything…

–
She said children aren’t empty vessels
patiently waiting to have facts poured in;
children are candles
filled with unknowable potential
waiting for the right flame.
And I’ve seen flames feed each other:
Kids teach adults.
Because what better way to be shown
the stupidity of our pre-convictions
than by someone who questions things
with new eyes?

Above the school entrance,
let it be engraved
in bold capitals:

CHILDREN ARE NOT TINY ADULTS
ADULTS ARE NOT FINISHED CHILDREN
EVERYONE IS CHANGING
EVERYONE IS FULLY FORMED
BUT ALWAYS MISSING SOMETHING MORE
NO ONE EVER GROWS UP
NO ONE EVER FIGURES OUT WHAT IT’S FOR
BUT SOMEWHERE, HIDDEN
UNDER THE WICK,
WE FIND THE WORLDS WE DIDN’T KNOW.

3 thoughts on “Aquanorth and Helen’s Poem”