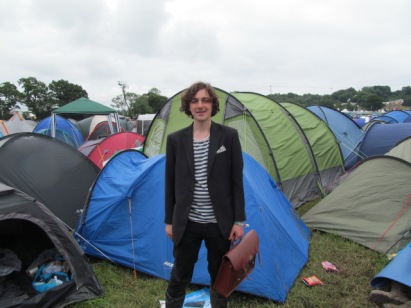 My first Glastonbury! Mud. Colours. Things with feathers on. I decide I’m going to start my new role as a Tent-to-Tent poet in the Pennard Hill campsite next to the Glade area. It’s a notorious party zone; having been to Glade’s separate festival, I sort of already knew that. A nice lady at a hat shop assures me that people there are ‘a bit twisty’- or, as she later explains, ‘on Ket’. 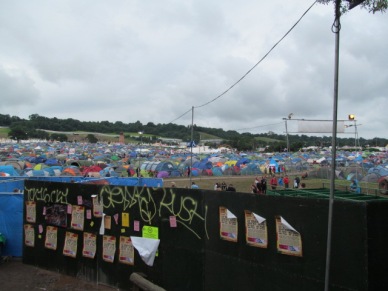 I’m approaching the campsite now and I’m starting to get pretty nervous. I’m nervous for two reasons. One is that I’m walking into an area filled with ravers and I’m dressed in a suit jacket with a briefcase. I don’t look cool and asking someone if they want a poem isn’t going to help things. The other, more pressing reason is that I’ve been told by the organisers not to do this in campsites, under any circumstances, as it poses a big security risk. I feel guilty for doing it anyway. I also wonder if this is professional suicide. A smart boy would do what they were told. But I feel that, without the link from houses to tents, the whole project doesn’t really work- it needs to be a place people call home, even if that place is temporary. Also, I’ve got to admit, I’m dangerously enamoured with the idea of being thrown out of Glastonbury for writing a poem.

But the warning has made me edgy and, as I pass some security on the way into the campsite, I get jittery. I start walking down a long path that splits the field in two. Where do I go? Should I start wading through the tents? In the end I take the lazy option and go for some people right on the side of the path.
I ask them if they want a poem. They say yes. I do the special Tent-to-Tent version of my intro piece*. They seem to like it. A lad called Sean says he wants a poem. ‘What’s important to you?’ I ask. ‘Humping bins,’ one of his friends says. ‘No,’ he says. ‘Taking acid and being called Acid Sean,’ another friend says. ‘You like doing acid?’ I ask. ‘Well no,’ he says, ‘I’m going to try it tomorrow’. We talk about what he thinks it’s going to be like. ‘Everything will just look better,’ he says. ‘What kind of things do you reckon you’ll do on acid?’ I ask. ‘Hump bins,’ his friend says again. ‘Get away from these lot,’ Acid Sean says, looking at them. We talk about the other things you could get away from on acid. ‘The referendum result,’ he says, laughing. It’s a good point. 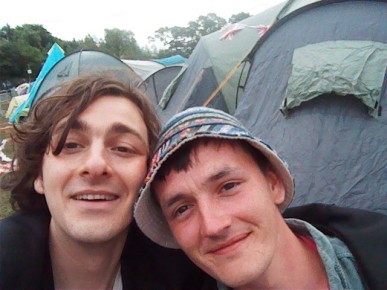 There’s no denying the EU is on the tip of everyone’s tongue this morning. Admittedly, I did mention it in my intro poem, but whether I did or not, talk around the campsites and on all the muddy trails is doomsday. I hear two different conversations about moving to New Zealand, apparently that might be the answer… I suggest the poem could be about the crap things you can escape from when you’re tripping balls, including Tories and your terrible friends. Sean seems to like this.

We get chatting a bit about what I do- how it’s normally on doorsteps, how I’m not supposed to be doing it here. ‘It’s a security issue,’ I say. ‘You’re a security issue?’ they laugh.

I wave goodbye and decide to go into the thick of the tents, off the beaten track. I walk for about 2 minutes and pass two boys sitting in a tent, with a girl in another tent opposite. I ask if they want a poem. ‘A what?’ asks the girl. ‘A poem’. ‘A pole?’ ‘A poem.’ ‘A pearl?’ I’m detecting some problems with my accent. I spell out the word. ‘Oh you’re a poet?’ she says. I do the poem. ‘What’s important to you?’ I ask. ‘The referendum,’ says one lad. We get chatting, it turns out they are pro-leave. We talk for a bit about why. I’m sure you’ve heard the arguments before, immigration, jobs, control. That sort of thing. ‘What do you think?’ asks the other lad, called Frosty. ‘I’m going to remain a neutral journalist here I reckon,’ I say. ‘No go on tell us’. I tell them I was in. I talk about why; Tories, the benefits of immigration, human rights. That sort of shite. On a normal day of rounds I might consider writing a pro-leave poem for them (I haven’t turned down a suggestion yet). But not today. Today I’m angry and the world feels like its ending. I tell them I respect their opinion, maybe that’s the poem? It starts to rain, Frosty lets me sit in his tent. 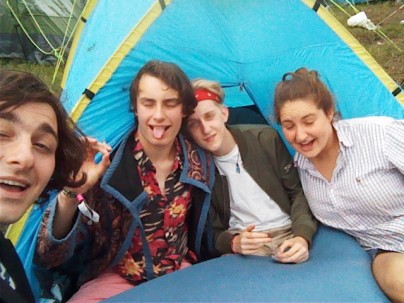 We change the topic. ‘What would your dream job be?’ I ask. ‘I’d look after animals,’ Frosty says. ‘How?’ ‘I’d have a little zoo,’ he says. ‘What kind of animals?’ ‘Loads. Llamas, elephants, giraffes, even zebras. I’d get a big field for them, about the size of Glastonbury.’ ‘Like a festival filled with animals?’ I ask. ‘Yeah, Zoo-stival,’ says Frosty. Would they listen to music? ‘Apparently dogs like opera,’ the other boy adds. ‘What about a silent disco for zebras?’ the girl says. We discuss the benefits of a festival for animals, what kind of music they would like. This is better, this makes me less frustrated. We get a picture and I wave goodbye. I feel absolutely on top of the world. For a few minutes, I forget about everything apart from how scary and exciting and fucking great this has been.

Acid Sean’s going to take some acid
Forget about the fucking bullshit.
His mates saying annoying things:
That he likes having sex with bins.
He won’t be stressed and lose his bean
About what leaving Europe means.
Instead he’ll have a whole new range
Of trippy things to test his brain.
Like why the mud looks like it’s rubber;
Is that hot dog undercover?
Where’s my phone? Is that my hand?
Bed? I just don’t understand!

Spare a thought for little Sean,
Who’s disillusioned and forlorn.
The far right’s forced him on to trips,
Thanks Boris Johnson, you’re a dick.

The Zebras do the silent disco
late into the morning
at Zoostival:
The festival for animals.
They come in two’s
to Zoostival
but also in other sized groups,
depending on how many tickets they could get.
At the gate, on the way in,
security check their ID.
‘Are you an elephant?’
‘Yes I am’
‘Do you have any identification?’
‘I have tusks’
‘Thank you for your co-operation’

The giraffes go to see Adele,
their heads swaying high above the crowd,
blocking the Rhino’s view,
show-offs.
The monkeys listen to Shy FX,
They love the jungle.

But one set of animals,
are not having a good time.
In the back of a chai cafe,
A group of dogs,
noses turned up, are sat.
‘What’s wrong?’
asks a Penguin.
‘I think we’ve made a mistake,’
one answers,
‘We thought this was opera.’

–
*I’m a Tent-to-Tent Poet,
A scruffy rhyming Geordie
But, y’know, at least
I’m not here from security.

I won’t be searching through your tent
for pills to confiscate
but if you’ve got one that you want to
share, that would be great.

I found it quite hard to relate
I grew up on a rough estate
Walls thin as paper used to trace
The clouds an endless shade of grey.

I’m here to make poetry exciting
Like bungee jumping but less frightening
So I’m at your tent to find
The subjects that flow through your mind.

Tell me what’s important to you
Anything at all,
I’ll stick it in a poem for you
However big or small.

Maybe you’re going to spend the weekend
Learning how to weave.
Maybe you can’t believe that
We have really voted leave.

Maybe you dropped your I-Phone 6
Into a Porta-Loo
I don’t know, it’s not the same
If I decide for you.

So cheers for listening to these verses
I hope I got across my purpose
Don’t run away, don’t be nervous
The Tent-to-Tent Poet is at your service.