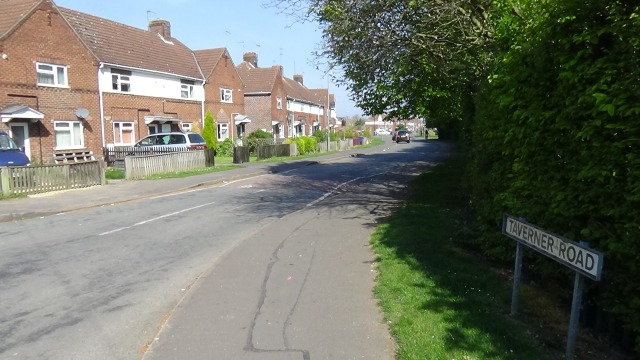 I’m outside Pauline’s house, about to deliver the first of 4 poems. It’s blistering sunshine- apparently this is going to be the hottest Easter weekend since records began, which is not something I’d checked before I set off from Newcastle this morning. I’m wearing a long mohair coat, a woolen scarf and everything is black. I could not be less appropriately dressed.

I walk up the drive and knock on the door. Pauline answers, smiling, with her daughter, Sandra, standing behind her. If you read the last blog post, you might remember Pauline is in to banger racing. I didn’t have any idea what that was so, the day after I met her, I went down to Skegness Raceway to watch some.

I tell Pauline I enjoyed it, it wasn’t what I was expecting. In fact, I was surprised at how full on it was. Spectating as cars collided at 70 miles an hour, or smashed into walls, I found myself wondering what motivates someone to do something this brave. I tell her the poem is my way of answering that question. 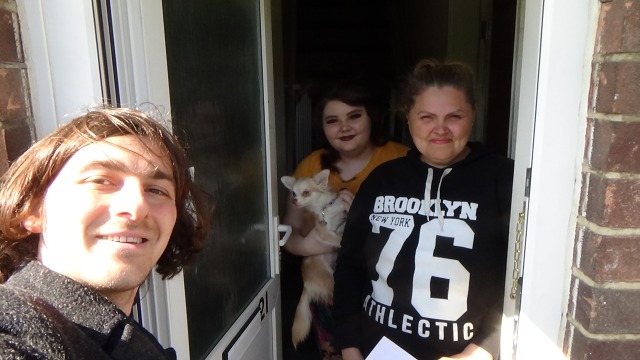 I read it out. I know Pauline doesn’t have much time this morning, she’s heading off to do some more banger racing in Scarborough, so I hand over a printed copy and make my goodbyes.
“Thank you,” she says, as I head down the drive.

She’s waiting on the racetrack
in a dayglo orange Astra,
her foot on the accelerator,
her hands upon the wheel.

The crowd gaze on in wonder
at this fleet of freakish bangers,
graffiti-covered,
windowless;
twisted, rusting bodies.

She’s waiting for the green flag,
for a hornet’s nest of engines,
where she’ll bump and scrape
at breakneck speed,
fight to keep her place.

And her work friends think she’s crazy.
And yes, she knows the dangers-
the chassis crumpling up like paper,
the touch of paramedics.

They’re all some half-forgotten dream
at the centre of what’s real:
Her foot on the accelerator,
her hands upon the wheel. 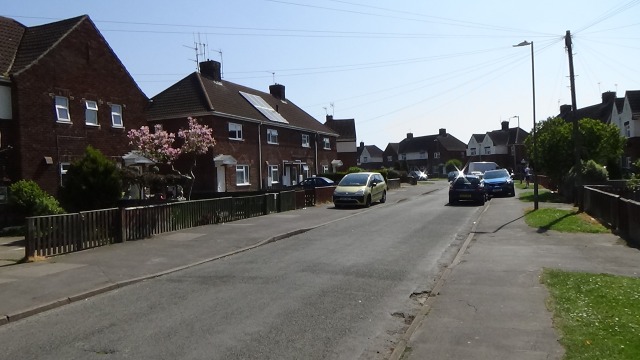 I’m walking up the street to Margaret’s house. I’m feeling more anxious about this than anything else today. Margaret is a lady who asked for a poem about her daughter being murdered. This is the most personal and tragic subject I’ve ever been given to write about.

I knock on the door and wait. After a few seconds, she answers. I ask her how she’s doing.
“I’m OK,” she says. “I’m feeling a bit low today.” It occurs to me that performing the poem in the street might not be the most tactful thing to do here. I offer to give her a copy to have a look at later, but she says she’d like me to read it out.

After I’ve finished, I hand her the copy.
“You’re right there,” she says, and spends a few minutes reading it to herself again. “That’s exactly it.” I don’t really know how to fully explain my feelings about this. I suppose my biggest fear was that I would somehow offend or upset Margaret. I’m relieved that there’s something in there that she can connect with, but the circumstances are just so horrible.

After a few minutes, it feels like the right time to leave.
“The things I could tell you about my life,” she says, before I go. “But where do you start?”

She says it gets more painful every day,
in the doorway with the blossom tree outside,
in a gentle voice a million miles away,
with eyes as wide and empty as the sky.

She talks about the stopping of the clocks,
the ground that disappeared beneath her feet,
how her teenage daughter went out to the shops
and was stabbed to death as she walked down the street.

She wants to stand up in the House of Commons,
just to see if it would even rouse them,
as she describes her story slow and solemn
and how she’s only one of many thousands.

To ask them how they’d feel if it was their kid,
would the police’s budget still get chopped?
Would they still squeeze the public services
to fill their crystal glasses to the top?

And she tells me that the nightmare’s never over,
that to her the moment’s playing on repeat
since the ticking of the second pointer froze
and the ground it vanished underneath her feet.

That, in her mind, she’s standing in the doorway,
waving her 15-year-old goodbye,
with a gentle voice a million miles away
and eyes as wide and empty as the sky.

I’m in Tracey and Graham’s bedroom, which doubles as their living room. They’re both sat on the bed and I’m kneeling on the floor. Tracey asked for a poem on the subject of being open about mental health, about the value of listening. I explain how it felt wrong to try and speak with her words. Instead, I wrote about a conversation I had with a friend. I read it out.

Afterwards, we’re chatting about Graham’s job when something happens that I wasn’t expecting. All of a sudden, Tracey takes on a completely different voice and stance. She begins talking like a small child, crawls off the bed onto the floor and pulls out a Peter Rabbit toy.

At first, I think she’s joking. But you can tell from Graham’s reaction that it’s not quite as simple as that.
“Do you think maybe you could go back inside?” he’s asking, in a tone which is relaxed, but serious. After a few minutes, she suddenly switches back.
“Why is everyone staring at me?” she asks.
“You know why,” Graham says, gently.
“Oh.”

At this point, Tracey explains that she has multiple personalities. In fact, she tells me that there’s a few. The person I’ve just met is called Lilly, who is 4 years old. There’s also Stanley, a fully grown man, who’s maybe a bit more rowdy. “He catcalls girls in the street, it’s a bit awkward.” Tracey explains that she can always see them, that they’re always in the room. And when they come out, Tracey is still in the room as well, watching everything from a distance.

What impresses me is how open and honest she is about all of this, how at peace she is with it- it’s as if she’s describing a case of hayfever, or the sensation of being double jointed. I tell her I think it’s fascinating, that I hope this comes across in the right way, I’ve never spoke to anyone with multiple personalities before.

Soon after this, I meet Stanley, who immediately spots the printed poem lying on the floor.
“Did you write this?” he asks. He shakes my hand and introduces himself. Graham carries on helping in a relaxed and gentle kind of way.

STANLEY: She’s having a tea party with Lilly under the bed.

GRAHAM: Do you think you could go and get her?

GRAHAM: Could you drag her out please?

TRACEY: Graham, I was having a tea party.

Soon, it’s just me, Tracey and Graham again.
“They’re all being quite mischievous today, aren’t they?” Tracey says. We talk about putting the poem and the story online. I ask her if she wants me to edit out the details about her condition, but she wants me to put it in. And, actually, it seems to me that this is the whole point of Tracey’s message: To feel confident enough to speak out about what is going on in your life.

It’s been an hour and I need to carry on with the deliveries. I make my goodbyes and tell her and Graham it’s been really nice to see them again.
“If you’re ever in Boston, give us a shout,” Tracey says, as they wave from the front door.

I understand it can be hard to find the moment,
when people ask you how you are
but they don’t want to know,
when the truth evokes a sharp and awkward silence,
sometimes, you say, it’s easier to hide it.

I’ve always got a pair of ears for you,
no matter what you’re holding underneath.
Please believe me when I say that anytime is fine,
and when I ask you how you are, I really mean it. 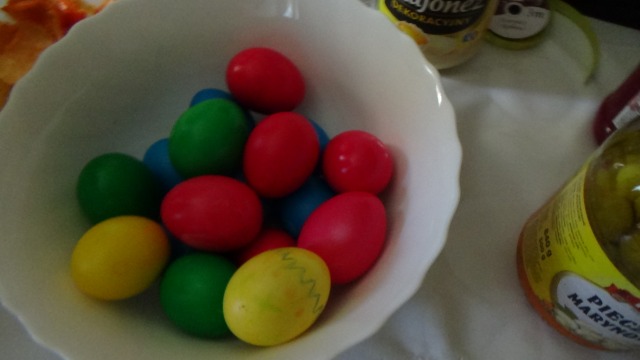 I’m in Wislawa’s living room, sitting at a round dining table. On the sofa nearby is Grzegorz and Ula, a couple who Wislawa has been friends with for 10 years. Sat at the table with me is their 10-year-old son, Feliks and Wislawa’s daughter, Billy, who is 7. When I came in, Billy instantly introduced herself.
“Do you want to see my moshi monsters? Are you going to give my Mummy a poem?”

Wislawa is moving in and out of the room, bringing in an assortment of traditional Polish foods. The Easter weekend is a really important part of the calendar to everyone here. Today, they’ve been to a big church ceremony. They’ve also made traditional Polish Easter eggs, which are hard boiled eggs turned all kinds of bright colours. There is a bowl full of them on the table.

I take a green egg and try one with some pickled mushrooms. Wislawa brings in some traditional Polish soup, made with potato, onion and fermented flour. All of this is new to me and really nice. I can’t say I ever would have considered fermented flour before.

I get to reading out the poem. Wislawa seems pleased, she begins to pull out various bits of card and ribbon. Last time we met, she bet me a homemade medal that I wouldn’t be able to find 3 people to write a poem for in Boston. I tell her that it’s not really important anymore, that I don’t want them to go to all the trouble. But Wislawa insists and Billy and Ula help her make it. I’ve got to say, when it’s finished, it is a top quality medal.

This feels like a good place to end my time in Boston. It’s been quite an emotional journey and, at times, it’s been hard to hear the stories I’ve been told. But I’ve met some really inspirational people, and I’ve found a huge amount of honesty, kindness and resilience here too.
“You’ll have to come back soon,” Wislawa says, as I get ready to leave. “I’ll make you cucumber soup next time.”
–

You’re wondering how to teach your daughter
the secret to be happy.
I think you should pass the words on,
the ones you shared with me,
about the pride you get from earning,
that is not about the price tag,
but the thought of how you worked for it
when you lie in bed at night.

You should tell her of the gain you get from giving,
about the sense of satisfaction
as you watch somebody grow,
how it doesn’t really matter where they come from,
how each of us are members of the globe.

Because you spend all of your days healing adults,
and I know this mustn’t leave much time for you,
but I think it gives your life a kind of purpose
that to me is, frankly, superhuman.

It’s this selflessness that keeps the planet spinning,
without its flow then no one would exist,
it’s the backbone of humanity,
it’s a reason to be happy,
and I hope you will accept this as your gift.

–
A show about the origins of Door-to-Door Poetry is currently on tour. Find out more here.

One thought on “Back to Boston”