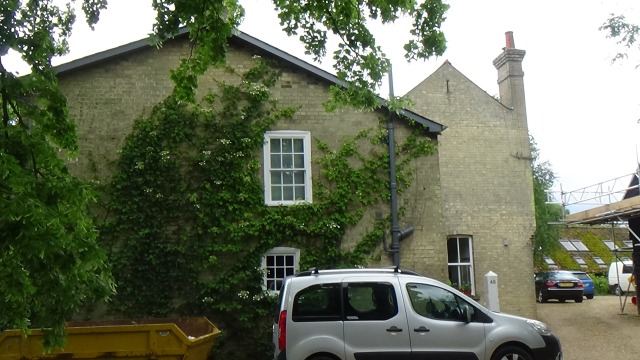 I’m outside Ian’s house and I’m bang on time. The hotel I stayed in last night has a check-out of 10am, so I’ve spent the past few hours having some tea in a nearby apple orchard, which apparently is the thing to do in Grantchester… I’ve got to admit, it was pretty relaxing. It also means it wasn’t very difficult to get here.

I walk up the gravelled path and ring the bell. After a few seconds, the door opens. Instead of Ian, a workman in a red cap and overalls steps out. I’m about to ask if he can shout for Ian, when he appears behind him, signs something for the workman, and invites me in. 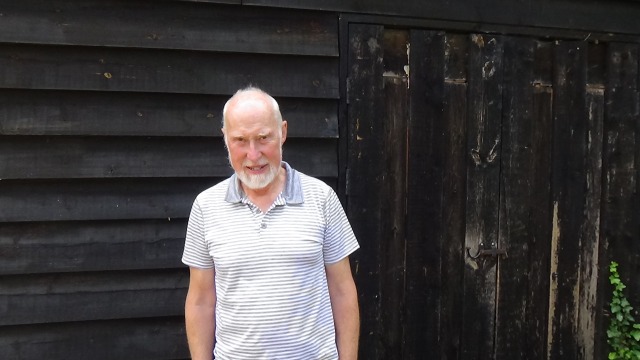 He leads me through the house to the kitchen- multi-coloured ceramic plates on the walls, a wooden table in the middle of the room. Through an open doorway, I can see a big conservatory, it’s got oak beams along the ceiling, with grape vines growing along them.

As he makes me a cup of tea, Ian asks me about Vladimir, the other person I’m delivering to today. Vladimir has already been in touch to say that he’s read my last blog post and he’s really happy that Ian is building an eco-home.
“Tell him he can come over any time he likes,” he says. We both sit down and I get out his poem.

When I met Ian, he asked for one about the climate crisis, about the importance of pressuring the government into making some major policy changes. It’s a massive subject. It’s also something that I’m really worried about. I explain that writing the poem forced me to confront some things about my life which I wasn’t very happy with. I tell him that, on the back of our meeting, I’ve joined Extinction Rebellion and started making plans to get a lot more involved in environmental demonstrations.

I’m a bit nervous about reading this out though. Firstly, Ian’s already told me he’s a big fan of poetry, but we haven’t really talked about what kind of stuff he likes. This definitely isn’t ‘academic’ or ‘aloof’ and, if that’s the kind of thing he’s into, I think he’s going to be disappointed. There’s also a lot of half rhymes in there. I know from my last visit that Ian’s quite serious about his full rhymes.

I bite the bullet and read it out.
“It’s got a lot of passion,” he says. “I like that it’s not about me too, I think you really picked up on this idea of it being about something much bigger.” I sense a ‘But’ coming. “But…. If I was going to say one thing, rhyming ‘Energy’ and ‘Tsunami’?” Completely busted. I explain my reasons, that I wanted the structure to be quite loose- like a rap would be. “Yes, I suppose it is a bit of a rap, isn’t it?” I think I’ve got away with it.

Ian tells me that his son-in-law is actually a climate scientist who’s part of Extinction Rebellion, that he’s going to send him a copy of the poem. I finish my tea and get ready to leave.
“Thank you very much for this,” he says. “It’s very kind.” He sees me to the door and wishes me all the best.

Five years,
we’ve got less than five years,
they’re opening coal mines, nobody cares,
while the ice caps dissolve and we’re facing the floods
they’re expanding Heathrow like they’re still unaware,
or fracking, or scrapping renewable energies,
ignoring the biblical droughts and tsunamis,
or pushing reusable bottles in shops
like it’ll stop the air choking, or bring back the crops,

it’s not nearly enough
we’re in the last days,
they set targets, ignore them,
it all stays the same,
there’s only one answer, one way to make change:
I’m going to superglue myself to Michael Gove’s face.
For our children,
it’s the only move forward,
I’m joining the new wave of civil disorder,
I’m going to dress like a polar bear, lie down in the roads,
I’m going to run into parliament and tear off my clothes.

I don’t care
if I end up in prison.
I don’t care
if you don’t think it’ll make a difference.
We’re facing the whole human race’s extinction,
I’d rather go mental than sign a petition.

I’m starting today,
I’ve made my decision,
I’m no Che Guevara,
no Gandhi, no Parks,
but this needs to be done, it’s the end of the line,
this world is our home and we’ve ran out of time. 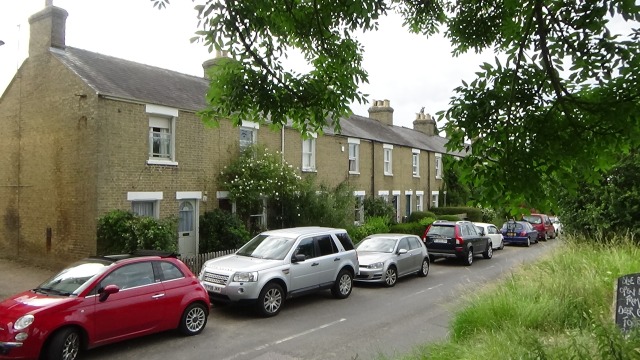 When I get to Vladimir’s house, he’s standing in the doorway, leaning casually against the frame as if he knew the exact moment I would arrive.
“The poet returns,” he says. “I thought I could take you for a pint?” I tell him this sounds great. “Do you want to have the pint first and then do the poem? Or poem then pint?” he asks. I tell him poem then pint, that way I won’t have to worry about what he thinks of it. We head into the living room and sit down on the sofa.

When I met Vladimir, he asked for one about Grantchester Meadows across the road, which was a favourite haunt of poets like Tennyson and Keats. Instead of telling me what was important to him about it, he wanted me to visit the place and decide for myself. So, the next day, I got a taxi back to Grantchester and had a stroll through the meadow. But not before I read the poems that Sylvia Plath, Ted Hughes and Rupert Brooke wrote about it.

I really enjoyed spending some time there, you can feel the weight of the history around the place. But, when it came to writing the poem, knowing how many literary giants had already covered the subject didn’t really do wonders for my confidence. In fact, it seemed to be the only thing I could think about: This feeling of being an ‘imposter’, of being somehow underqualified to do this job. I decided the only solution was to write a poem about that.

I read it out to Vladimir.
“To be honest,” he says, smiling. “I wasn’t really expecting that. When you first visited and said you were a Door-to-Door Poet, all I could think about was Death of a Salesman.” 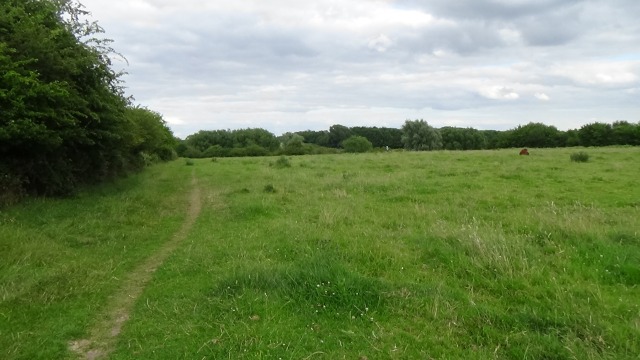 We take a walk down the road to the Blue Ball Inn. We sit down at a little table outside, facing the meadow, and get chatting about Vladimir’s childhood, about growing up in Florence.
“The problem with Florence is that there’s this attitude of ‘We’ll always have the past.’ Like ‘We have the finest architecture, food, art. So why change anything?’ It can be quite frustrating when you live there. It’s a bit of a Renaissance Disneyland.”

He tells me about moving to England, about how, before he became an English Lecturer, he worked for a group in Liverpool that used poetry and novels as a form of therapy.
“We worked with people in prisons, people with mental health issues, people with dementia. The lady who ran it was a very colourful character, she was a punk and had a great amount of energy. She really believed that literature has this power to heal people.”

We get talking about how memory is emotional and not logical, how putting yourself in another character’s shoes can help you process things in your own life.
“If you look at the way children go about things, they are always making up stories,” Vladimir says. “For better or worse, that’s how we understand the world, it’s what makes us human.”

After about an hour, it’s time for me to head off.
“If you’re ever in the neighbourhood, let me know,” Vladimir says. It feels like a lovely place to end my trip. It’s been very different to how I imagined. On my first day here, I honestly believed that this wasn’t going to work at all. To have found two people who’ve been willing to give up so much of their time, to share their story with me, has really made me think about what is possible in this project.  I thank Vladimir for looking after me as he heads off down the street, waving as he goes.

A poet went to wander in a meadow,
to skip through sunny fields like poets do,
to seek some inspiration where the grass grows
on footsteps left by Byron, Brooke and Hughes.
He felt their presence in the river’s flow
which winds past willow trees in dark green hues.
He sat, like many have, to pen some lines
by waters that are deep and old as time.

This was going to be a masterpiece,
a work that would secure his fame in letters,
a style no human eyes had ever seen
like Blake and Ginsburg’s lovechild, only better.
But though this English meadow was serene,
the larks did sing in sweet and balmy weather,
he waited for a chord that never struck-
he stared at a blank page and he was stuck.

This would not do! He threw his pen aside,
he moaned and placed his head upon his palms,
when soon he sensed a figure by his side
and looked to see a wood nymph, standing calm
with locks of golden curls and chestnut eyes,
a gaze that seemed to know the road is long
and, with a voice of slow and soothing tone,
she asked: “Why are you weeping here alone?”

He said: “I’m an imposter in this place.
I vainly thought that I could match the powers
of all the many literary greats
who’ve scribbled on this field for countless hours.
My skyline’s council blocks and takeaways,
I don’t know the names of any flowers,
I spend my evenings eating Coco Pops.
I thought that I could blag it, I cannot.”

She stood through all his heart’s torrential gushing,
which flowed for longer than you’d care to wait;
she didn’t try to interrupt or rush him,
just listened with the patience of a saint
and, when this storm had petered out to nothing,
her lips revealed a tiny smile so faint
as she replied, with all of wisdom’s wealth:
“Jesus Christ, just get over yourself!”

“Say anything, it doesn’t make a difference,
it turns to vapour in the blur of time.
Like every other sentence that’s been written,
they’re shadows cast by something much more bright.
But that’s the liberating part of living!
No one can sum it up, but still we try.
Fortune favours those who have a go
and, after all, it’s just a fucking meadow.”

At this, she walked away along the path.
He shouted: “Wait, you never said your name!”
She answered, without turning back: “It’s Plath.
Although I’m hoping we don’t meet again.”
Then suddenly, there came a blinding flash,
this nymph, when it had passed, did not remain.
So he stood up and, feeling less depressed,
he wrote a poem about himself instead.

–
I’m currently touring a show about the beginnings of the project. To find out more, click here.