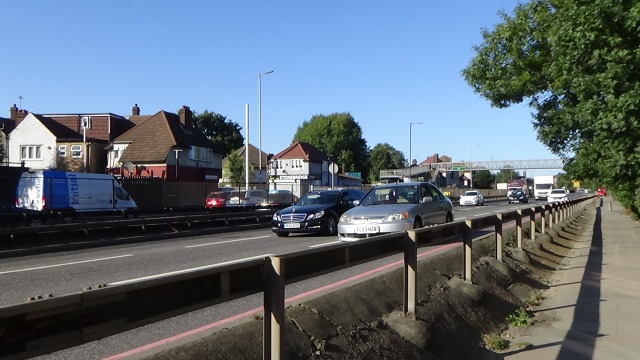 I’m at the North Circular Road. This weekend, I’m delivering all of my 6 poems for the residents of London, and I’m starting with the people I met here, next to the Swaminarayan Temple. It’s been 3 weeks since I was in the area. Everything looks a lot smaller, maybe it was the nerves.

I’ve arranged to meet Sam at his house at 2 o’clock. After that, Jack has said he’ll meet me at half 3. I haven’t had word back from Sarah, but she did mention that she might be on holiday this weekend. I’ve brought a poem about bouncy castles for her 4-year-old daughter, Amy. I figure I might as well give her a knock and, if she’s not in, I can post it.* 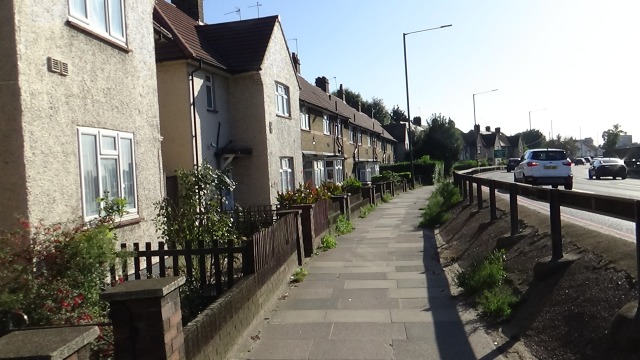 I find Sam’s house and ring the bell. A lady answers with short brown hair and thick spectacles. I ask her if Sam is about and she invites me inside. It turns out this is his mam, Anne, and she leads me through to the living room, where a brown Staffie and a tiny Yorkshire Terrier seem very pleased to see me.

Sam comes in, says hello, and offers me a cup of tea. I sit down in a green leather armchair and Anne and him sit on the sofa nearby.
“How do you write a poem for someone you don’t know?” Anne asks, in a broad cockney accent. I tell her it depends but, basically, we have a conversation. In this case, it was about strangers. I decide it would be easier to read them the poem, so I get it out. 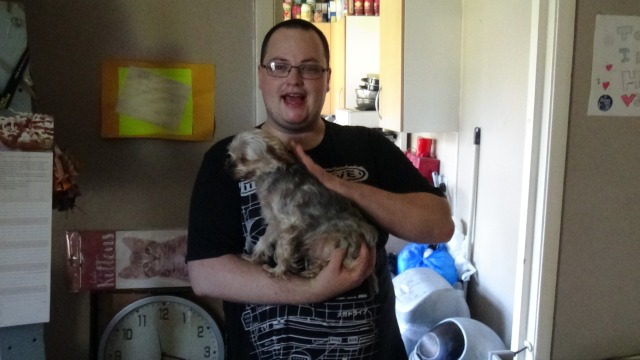 –
“It takes me back to when we first moved in here,” Anne says. “Our next door neighbour was amazing. She taught me about gardening, she’d look after Sam when he was a toddler. It doesn’t really work like that anymore.” I ask her what is different about her neighbourhood now. “Mistrust. Everybody thinks you’re out for something.”

My phone starts ringing. It’s Jack. He tells me his dad isn’t very well at the minute, so we’ll have to sit in his car outside the house, which isn’t a problem. I explain that I’m just delivering a poem to Sam, that I’ll be over when I’m done.
“Tell him the twins said hello,” he says. I pass the message on. It turns out that Jack and Sam already know each other. In fact, they’ve been friends since they were kids.

I make my goodbyes and head for the door.
“Good luck with everything,” Sam says, as I step out into the street.

–
Never Know
–
They say no one talks round here,
not in a place like this.
And I wonder when it happened.
When did we lose faith in strangers?
When did we assume silence
stands for animosity?

I say for every wicked deed
there are endless acts of kindness.
I’ve seen them,
in the white static of my periphery-
there are neighbours cutting old people’s grass,
Citroens letting children past,
shopkeepers waving,
strangers picking up dropped handbags.

There is beauty,
if you choose to see it,
and to ignore this
is to give up
on half of life’s complexity.
Some people will let you in,
some strangers can be kind,
the world is a billion stories,
you never know what you might find. 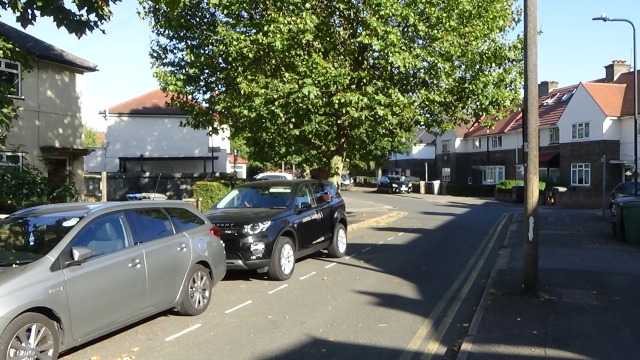 I spot Jack in his car. He’s wearing a khaki Adidas tracksuit and he’s smoking a vape. I hop in and he asks me how I got on with the poem. I take a minute to explain.

When I met him, Jack told me he was a police officer and was suffering from PTSD. It was such a brave thing to share with me. He said he would like the poem to help raise awareness about the condition, and to point out how toxic masculinity can feed the problem.

As I’m no expert on this condition, I decided the best way to approach the subject would be to write about Jack’s personal story. But, to make this work, I had to imagine some details about his life, and I’m a bit nervous about what he’s going to make of it all.

I read it out. I think it’s went down OK.
“I know part of it is your imagination,” he says. “But it’s still really relateable.” And it turns out Jack’s brought something for me too. “I’ve took up digital art,” he explains, getting an iPad out. “I thought I’d do something in return.” He shows me a picture he’s made for me. I really like it. 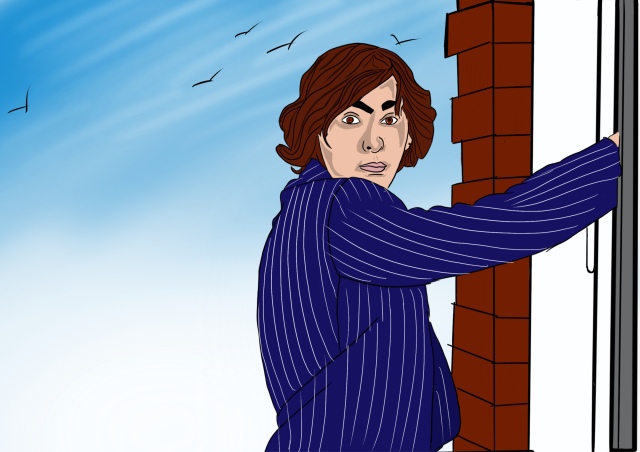 Before I go, Jack mentions my last blog post. He’s noticed I never actually went to the Hindu temple nearby, which originally led me here in the first place.
“You have to go,” he says. “Apart from Wembley Stadium, it’s the only thing round here worth seeing.”

I promise Jack that I’ll have a look on the way home, then hop out the car and wave as he drives off down the street.
–
–
Tin Man
–
The nickname that she gave him was the Tin Man,
no teary film would ever make him stir.
He never spoke in passion, always planned,
and never brought his work back home to her.

Ten years in the force, out on the beat,
you walk through storms some people couldn’t weather;
the first to find the rope in dead end streets,
to hold the open bodies back together.

They offered counselling from time to time,
he didn’t really think about it long.
Why make a fuss when he was coping fine?
You’re trained to deal with it, you carry on.

So, years flew past, and with them came the cuts,
some got sacked and some chose other lives.
He found himself alone in neighbourhoods
trying to part the tide of rival knifes.

And, night by night, at home he got more distant,
he’d meet the questions of his day with shrugs;
she told him she was always there to listen,
to talk, she asked him why he never would.

But what was there to say? This was the job.
You dealt with it, it’s not about your feelings;
though, hours after she had nodded off,
he’d lie awake and stare up at the ceiling.

Until, one day, he’d drifted out too far,
she packed her bags and headed to the door,
he watched his life reversing in the car
with no one left to hide from anymore.

And every monster under lock and key
came rushing to the centre of his head.
The truth that he could never let her see,
the beating heart beneath his metal chest. 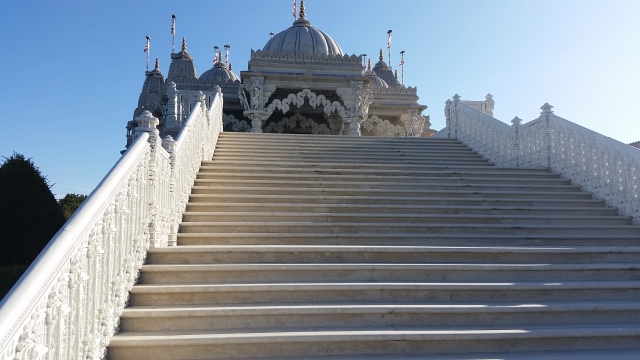 I’m standing barefoot in a huge marble room. Next to me is a glass case, filled with a brightly coloured statue of Ganesh. On the side of it is some handy information, as well as a polite request not to take any photographs indoors. An elderly man stops near me and does the salute to the sun, stretching his arms upwards before folding down on to his chest.

I head into the middle of the space, towards some stone pillars. Then I look up at the ceiling….

I really wish I could take a picture now. I am looking at the inside of a gigantic dome, all of which has been carved with the most intricate details into a mandala pattern. In the very centre is a shape similar to a chandelier. Around this are concentric circles, increasing in complexity as they move outwards- first geometric triangles, then floral patterns, and so on- increasing in detail, circle by circle, till it reaches the outside: A ring of gods, of human forms, all reaching towards the central point.

The whole thing is lit up and the lights are slowly changing colour, from red, to purple, to pink, to blue. I stand and absorb it… I am a very long way away. I feel something without really needing any context.

I feel that everything depends on the centre. And every circle is a different dimension; from the subatomic, to the single-celled organisms, to plants, to humans. The dimensions get bigger and more complex as they move out, but they are interconnected and they all depend on each other to exist.

And, as I stand here, staring up at the ceiling, the universe and every single thing in it makes complete and utter sense…
–
–
*Bouncy Castle
–
There is a bouncy castle at the party
and I need to know
if I should just stay here
or if I should have a go.
There is lots of people in it,
everybody’s smiling,
I think I’m going to have a try-
it looks quite exciting.
I take off my shoes and I climb inside,
I jump on the floor and shoot off into the sky.
I’m a superhero,
I’m walking on the moon,
this is much more fun than an ordinary room.
I never want to get off,
I don’t have a care.
I wish that every building could be made of air.
–
Rowan McCabe

–
This trip and the subsequent blog post has been generously funded by Apples and Snakes.