It’s Friday the 13th and I’m back at St Gemma’s Hospice. It’s the day after the general election and everything feels [amazing/apocalyptic] delete where appropriate. I’m here to deliver my poems for Lewis, Murray and Sharon, who are all patients here and are all approaching the end of their lives.

At the reception, they give me a pass. I head upstairs to the Moors Ward. I explain to a nurse that I’m here to see Lewis and she goes to let him know, before coming back and telling me to head through.

In his room, Lewis is lying in bed, finishing his dinner. I tell him I’ve got his poem, that I went with the idea of him not being a very spiritual person.

“Do you know what a Ouija board is?” I ask him.
“Yes, the kids used to muck about with one when they were young,” he tells me, matter-of-factly.
“What did you think about that?”
“I thought it was a load of rubbish,” he says.

I read him the poem. We start to talk about the importance of getting to know strangers.
“Just before I retired, there was a lady who worked in the kitchen. She used to make my coffee every morning and we got quite friendly. Gradually, she told me that her husband was abusing her. She said, ‘I don’t know what to do.’ I said, ‘You need to fill a suitcase and walk out.’ ‘I don’t know if I can,’ she said.”

“2 years later, I happened to be in a pub when this couple came in. I knew the feller, an engineer, and this woman was with him. As soon as she spoke, I realised it was the woman from the kitchen, that she’d left her husband. She said, ‘I’ve never been happier in all my life. You told me to do that.’” I suggest that, sometimes, you just don’t know the effect your words have had.

It’s been lovely seeing Lewis again, I’ve really enjoyed getting to know him better. I thank him for being involved in the project and head for the door.

–
No Fever for Ouija

I’m just not a spiritual person,
I possess no magical beads,
I’m a long way from crazy for Reiki,
I prefer reading books to tea leaves.
I’m not trying to hack down your Chakras,
I don’t want to harrow your Tarot,
I don’t care what you do in your spare time,
I’m just saying I don’t want to know.

And maybe it’s down to the length of my hair,
or the music I like, or the clothes that I wear
but wherever I am, from the shadows emerges
a spiritual person, who taps me and murmurs:

And before I’ve had a chance to explain,
they’re seizing my hand and asking my name,
relaying a message acquired from my Gran
through some mystical gems in a hessian bag.

I don’t want to argue, or seem impolite,
so I’m listening, and nodding, and saying it’s right
but, all of the while, as they’re rambling on,
alarm bells are ringing and something is wrong:
They say that they’re gifted in sensing the vibes,
in reading the messages etched in our lives
but if that’s the case, I’m wondering how
they can’t feel the signals I’m giving off now.

I don’t want to sound bitter,
I say go your own way,
if it’s something that gives your life meaning
that’s great,
but I’ve no scope for horoscopes,
no fever for Ouija,
so if a message comes for me,
turn off the receiver.

Next up for delivery is Murray. When I get to his room he’s watching TV; a nurse has just come in with a cup of coffee.
“I’ll have to get an appointment book,” he jokes.

When I met him earlier in the week, Murray and his wife Doreen asked for a poem about the old music hall events at Leeds City Varieties. Doreen suggested I get in touch with the venue and see if someone could give me a tour. 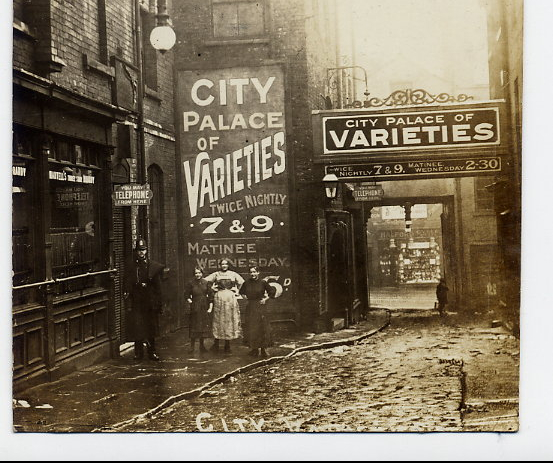 That afternoon, I emailed a man called Stephen. He said he’d be happy to help, but I wouldn’t be able to get in the building till mid-January, as they were busy rehearsing for Little Red Riding Hood The Rock ‘n’ Roll Panto.

Unfortunately, there just wasn’t time to wait. But Stephen did send some old photos and a really useful history on the place, which had appearances from Lillie Langtry, Charlie Chaplin and Harry Houdini.

“We have recorded audiences of nearly 3,000 during the musical hall era,” Stephen told me. “If an act wasn’t very good, they’d quickly be booed off, have things thrown at them, or be urinated on by young boys in the upper balcony.” I’ve had a few gigs like that myself.

I tell Murray that, in the end, I invented my own music hall star and wrote a poem about that. When I’ve finished reading it, he instantly tells me he’s had a brainwave.
“You should put that to music, many of the music hall ditties were accentuated by the band.”

I think this is a brilliant idea. Part of the money I got from the Arts Council is to do something with the poems once I’ve delivered them. I can already think of the perfect musicians to ask.

I thank Murray for all of his help and head off.

–
The Legend of Danny Do Nowt

It was back in 1924,
in Leeds City Music Hall,
the seats were packed with punters
all decked out in Sunday best.
The men in suits and bowler hats,
smoking pipes with waxed moustaches,
the ladies wrapped in feather boas
and sparkling satin dresses.

The band struck up, the curtains drawn,
the host came on and welcomed all
to a scintillating evening
of great variety,
of sing-alongs and frantic dances,
actors, clowns and acrobats,
a veritable smorgasbord
of talent, wit and beauty.

And so it passed, a few acts through,
a man called Daniel, no one knew,
walked onto that stage
and did something strangely clever,
it captivated all the room
and sent some women in a swoon
and changed the entertainment world forever.

But what exactly did Dan do?
It’s difficult to say, it’s true,
when asked about it afterwards
spectator’s eyes would fall.
He didn’t juggle, tell a joke,
sing, or swing along a rope.
The truth is, Danny didn’t
really do that much at all.

But it was the way he didn’t do it,
everyone agreed on this,
it was vital, it was honest,
it was pure reality.
To see him in the limelight,
looking bored and ordinary,
it seemed the essence of humanity.

And so began the rise to fame
of what became a household name-
the legendary Danny Do Nowt’s 30-year ascent.
He sailed away to distant plains
not performing every day,
the press went crazy everywhere he went.

But it all went wrong, or so they say,
one fateful night in Morecombe Bay,
in the middle of his famous nothing show,
when a lady stood up from the stalls
and shouted loud above the hall:
“I bet you Dan can’t not do nothing though!”

Danny froze, shocked, panicked,
nothing was his only trick,
to not do nothing seemed beyond his head.
He tried to not not do nothing…
somehow it wasn’t quite the same,
they booed him off while pelting rotten veg.

For Danny, that gig spelled the end,
he was never seen again,
but there’s a plaque outside the music hall
to mark his wonderous life,
and the ripple of his fame is seen
in most reality TV,
cos nothing now is all we really like.

My last delivery of the day is for Sharon. In the ward, I stop one of the nurses and ask if I can see her. They go to check. When they come back, they tell me that Sharon’s not really feeling very well today, but she’s said I can come in all the same. I make sure that’s OK with the nurse and then head inside.

In her room, Sharon’s sitting in an armchair, looking a bit pale and tired. As I say hello, her eyes close and she starts to nod off. I ask her if she wants me to come back another time, but she signals for me to stay. I pull up a seat.

When I met Sharon, she asked if I could write her sister a poem about the importance of staying in touch. It struck me that, in moments of deep crisis, it’s never work or money that gives us any comfort, but the thought of the people we love.

When I get to the end of the poem, she says something, but her voice is quite far away. I lean in and ask her to repeat it.
“Thank you,” she whispers, before nodding her head down and falling asleep. I leave a copy on a nearby table and gently step out of the room.

It’s been an emotional leg of the journey. I think it says a lot about Sharon’s personality that, despite being unwell, she insisted on letting me deliver this.

On the train back to Newcastle, I don’t really feel like doing anything. As I stare out of the window, life seems fragile and brief and intensely beautiful. It’s a message I know I won’t forget.

–
And When I Got the News I Thought of You…

And when I got the news I thought of you,
all I wanted was to hold you close.
I saw those endless lists of jobs to do
were dull distractions from what mattered most.

Outside, the leaves are falling on the ground,
the children laugh as they run home from school;
the sun is bright, the world is spinning round
and suddenly it all slides into view:

We tightrope tread our way through every second,
the slightest breeze could knock us on our path,
yet never stop to celebrate the present,
preparing for a world beyond our grasp,

but now that fog has lifted from the scene,
to walk with you is all there’s ever been.

–
With special thanks to all of the staff at St Gemma’s.